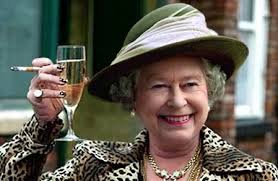 It was a shame Sir Tony lived in these afore-mentioned colonies. She rather fancied Sir Tony and felt a little flutter every time he frogwalked into the palace. She’d reprimanded Prince Phillip many times for calling him the court jester.

If she had her way she’d like to play Spot the Corgi with Sir Tony in the double poster while Sir Phillip was taking a nana nap. After all she’d done it with Sir Rolf Harris after the life drawing session and that had rounded out one’s afternoon quite nicely.

Those colonials went off at the sight of a tiara in a four-poster bed!

Sir Tony entered the room in his funny walk. “M’lady, ma’am”, he blubbered. She motioned the servants and real court jester out of the room.

“Sir Tony”, she extended a sequined arm and she could feel a little stirring in her own southern colony at the sight of those strange skimpy red knickerbockers she’d been told were so popular in the antipodes.

Elizabeth HRH blinked and her royal garter shook with astonishment and then she said this.

“Sir Tony, you’ve had a long sea voyage. Many days and nights, you’ve risked life and limb to see me. It’s natural you should feel a little delirious.”

“On the contrary, m’lady, I’ve never felt so sane. After all he’s done for Australia, it’s only right.”

“Oh, well, alright then. He is running a little short on titles. It might cheer him up, he was beginning to feel like a useless, pompous old git, but if he is made Chief Colonial that might pep him up.”

Sir Tony beamed. “I was hoping you’d say that.”

Elizabeth HRH’s eyes narrowed. “But there is this one condition.”

“Anything, your eminence. Just name it and you can have it” Tony burst out.

“Well old Sir Phil isn’t up to a little Spot the Corgi these days”, she said. “So you’ll have to do. And make sure you wear those red knickerbockers, one would be most amused. I myself will be in the royal drawers”.

Sir Tony went pale. HRH was HRH, not girlfriend material. He was more a fan of the animal print Amazon with the drink driving charge. Speaking of whom, once Peta found out that he’d bonked the queen he’d be needing his own new set of underwear.

But duty beckoned. And so did the queen.

Meanwhile elsewhere in the palace, Sir Phillip nana napped the noon away, dreaming of far-flung outposts where aboriginals still threw spears at each other.

Paris and France by Oliver Gee

Some kind of journey.

a bike for all seasons